the AUDI ‘Q8’ is a first-of-a-kind; an all-new top premium model for the german automotive brand’s SUV range. conceptually, it was first teased at NAIAS and the geneva motor show in 2017, before its full worldwide debut in early june 2018. ahead of the rest, designboom test drove the new car. and the only place to trial its rugged capabilities and bold styling was in atacama, chile, where, just like the car itself, toughness is matched with stunning beauty. 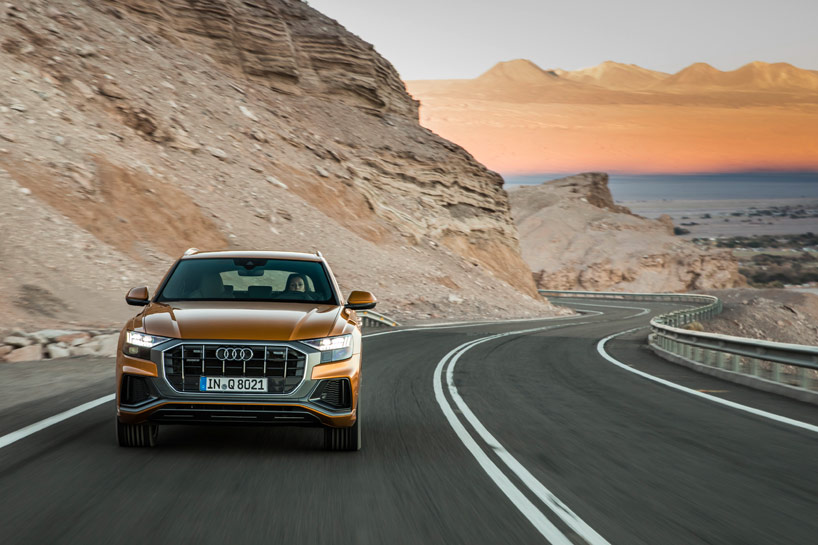 to start, the front of the AUDI ‘Q8’ is defined by the prominent octangonal-shaped singleframe grille. this acts as the all important stage that not only impresses itself, but also enables the front’s other styling features to show off. this includes the headlights that extend from the grille’s top sides, and the highly contoured air inlets, which drop towards the wheels. furthermore, the grille is the source for the rest of the exterior’s aggressive cuts and thus dynamic appearance, such as the lines that run along its elongated bonnet. 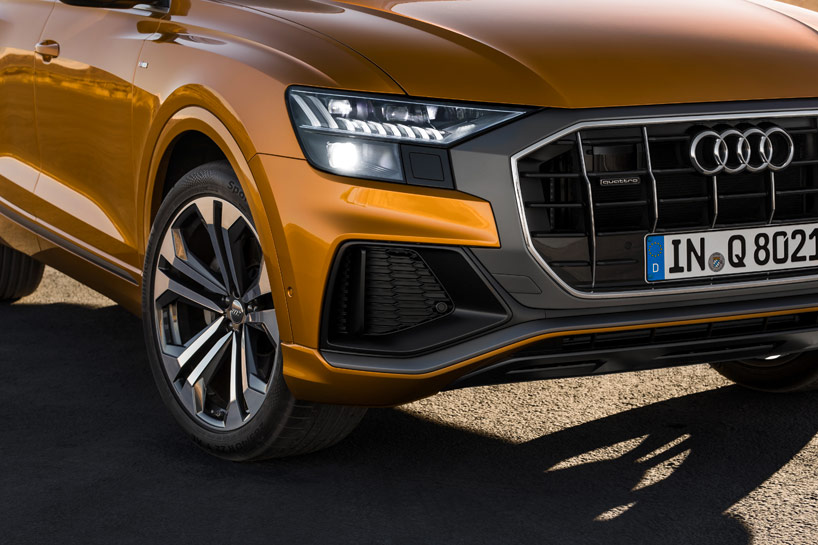 the car’s length – 4.99 meters – establishes an image of elegance, even though it is built for conquering every terrain. in terms of this luxury, the side profile has a sloping roofline with an angular C-pillar. this quality, unlike many other SUVs, alludes an appearance of compactness but still defines a commanding on-road presence. in contrast, as a representation of its capabilities, the sculpted groves of the front extend towards the rear with a muscular shoulder line, which, especially when catching the chilean sun, evokes power on top of the wheel. 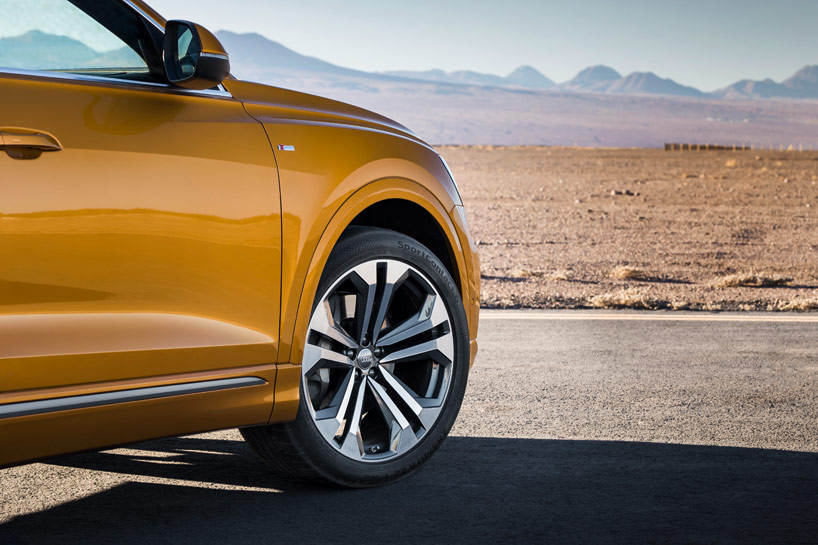 merging these characteristics of performance and luxury, the rear features a black beam panel that, in daylight or at night, makes the ‘Q8’ instantly recognizeable. these three features – shoulder line, C-pillars and rear panel – reference the all-conquering ‘sport quattro’ from the 1980s. as well, the body of the ‘Q7’ was also part of the SUV’s initial inspiration. however, after sourcing these cues, the design was further refined to truly match its ambition as the brand’s most premium model. 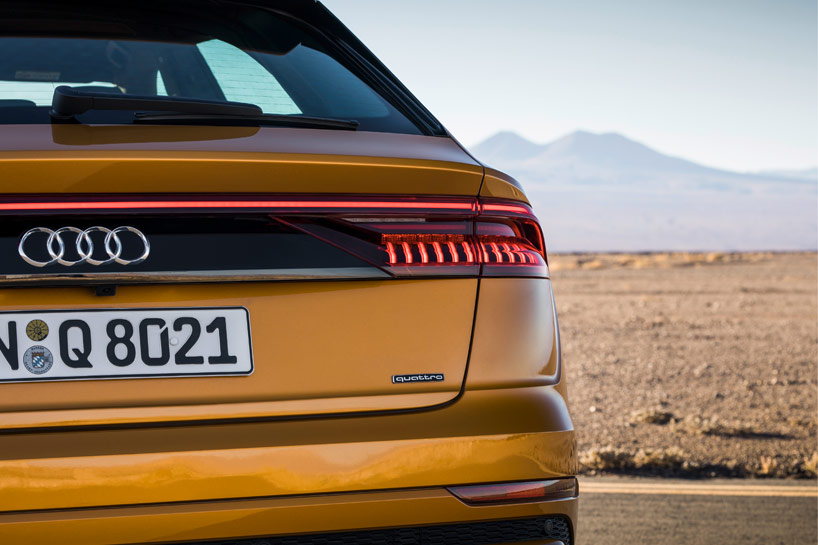 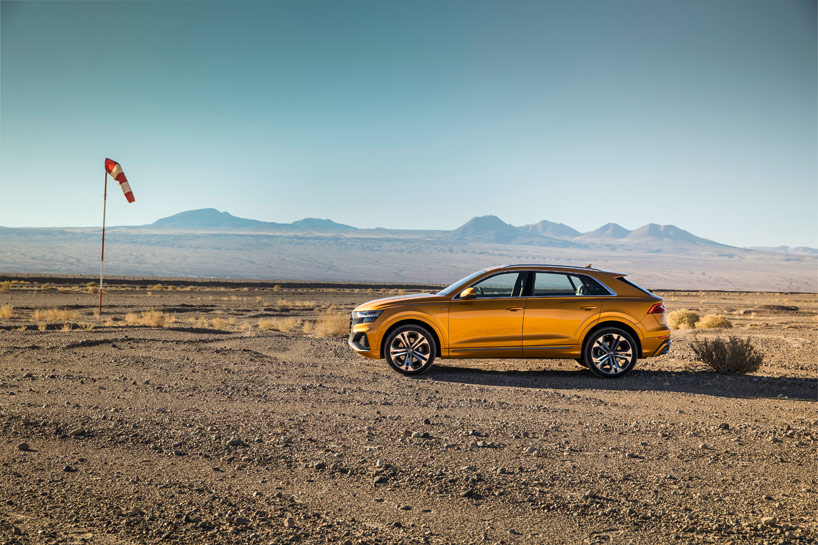 stepping inside from the extreme terrain, which in atacama ranged from scorching deserts to freezing mountain tops, the interior of the ‘Q8’ is a spacious environment of tranquillity in comparison. the very clear design follows a philosophy of layers that interact in harmony. these four sections include the floating wrap-around that extends from door to door, the dominating digital core, the mechanical wrap that features elements such as the air vents, and finally the soft layer which is closet to the driver and passenger. 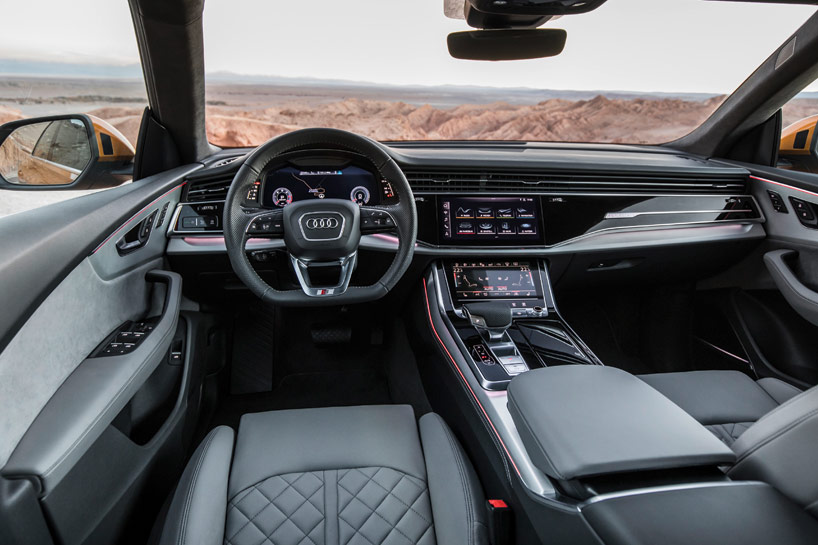 in terms of its own capabilities, the interior is once more superlative. the all-new MMI builds upon that of the ‘A8‘ and features haptic and acoustic feedback to create an easily manageable and customizable experience. this is especially notably when switching between the navigation, which even works at 4500 meters above sea level, the infotainment center, and the drive select modes – including dynamic, comfort and off-road. the car also features its own intelligent assistance, which understands and helpfully responds to much more than questions, such as turning up the heating when passengers say that it is too cold. 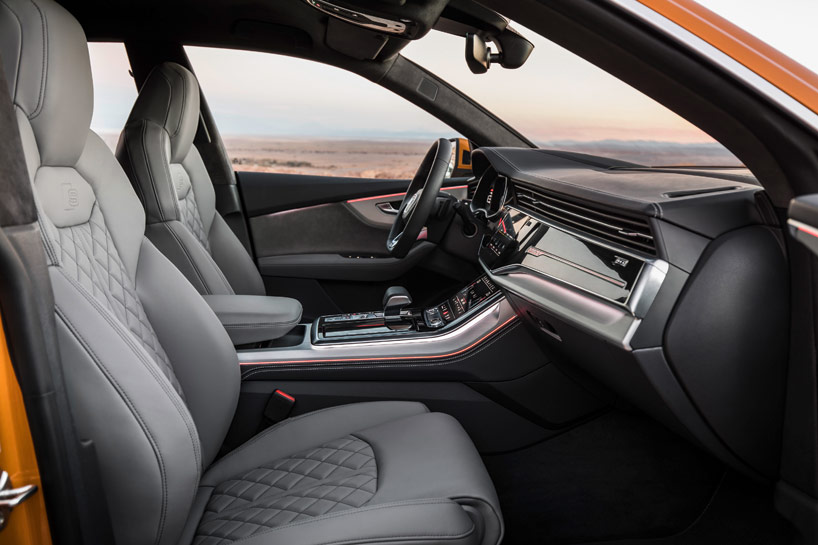 as well as its six drive select modes, the ‘Q8’ also features 39 driver assistance systems that help in off-road, parking and even trailer driving situations, to just name a few. the ease at which the SUV not only immediately adapts but conquers one type of terrain to another is effortless. from high speeds on highways, with the help of a 50 TDI that produces 286 hp, to tackling rocky off-road trails and hazardous snow-covered mountain paths, the car, like all things of elegance, seems to never even break a sweat. it further proves that the model is as they hoped: AUDI’s top of the range SUV in all aspects, aesthetically to performance. 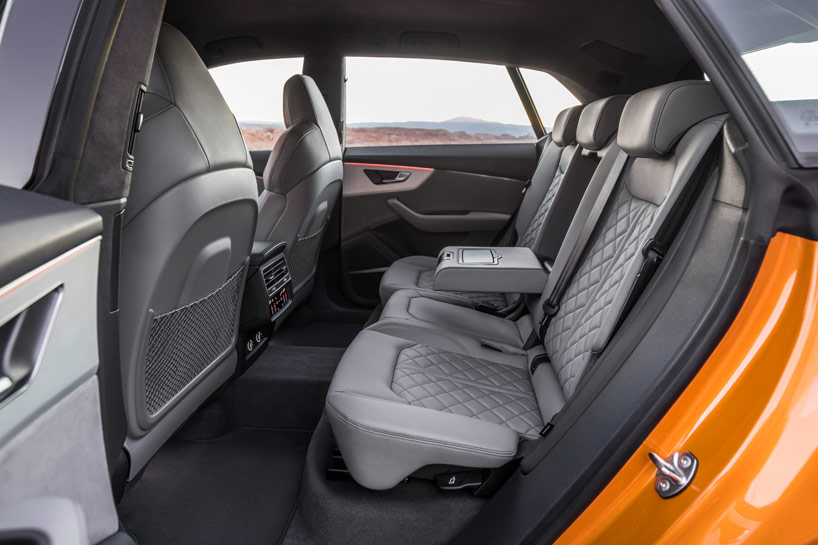 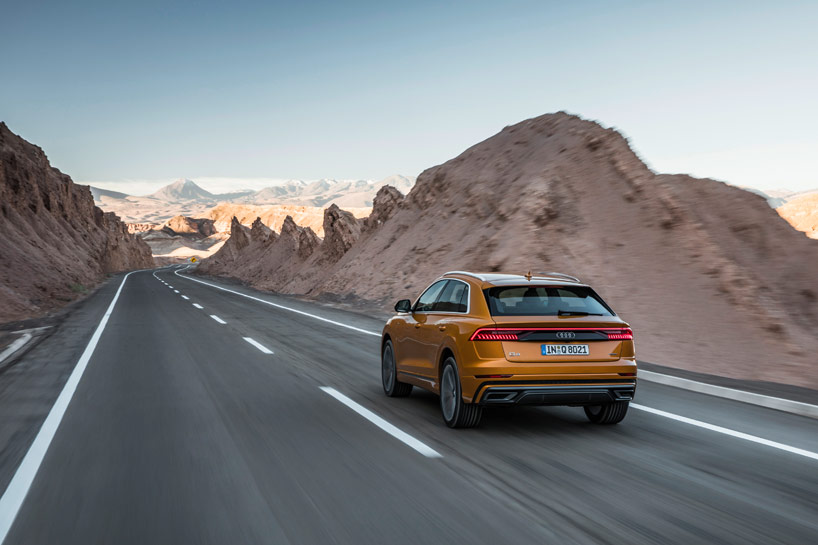 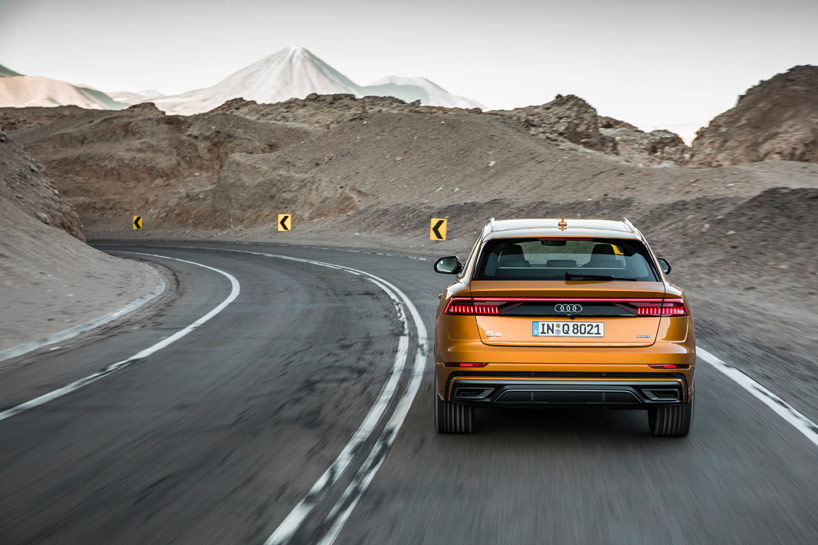 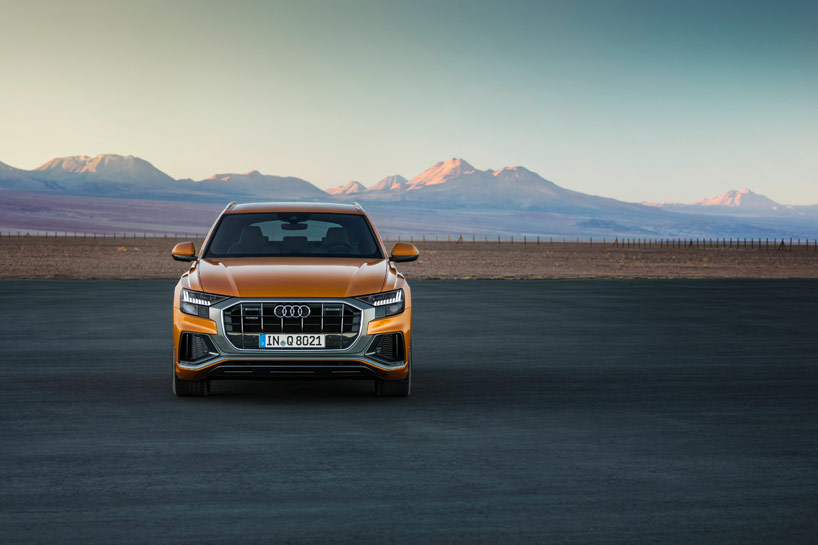 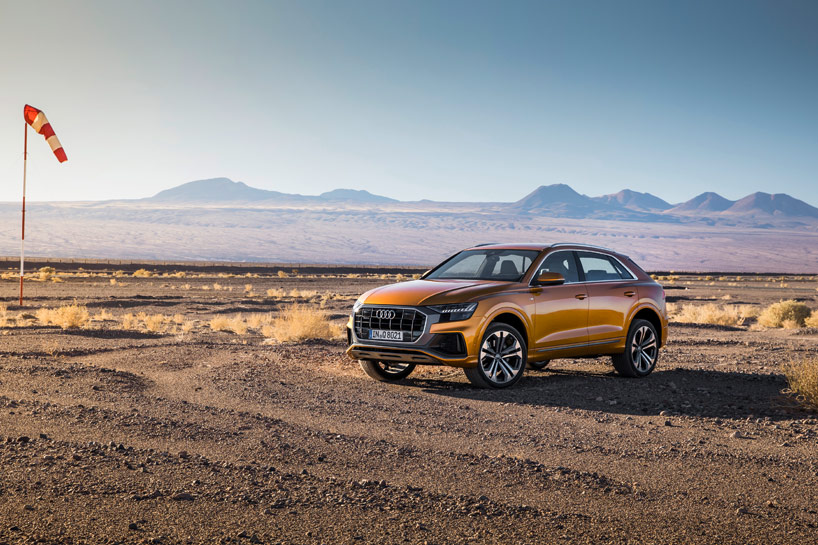 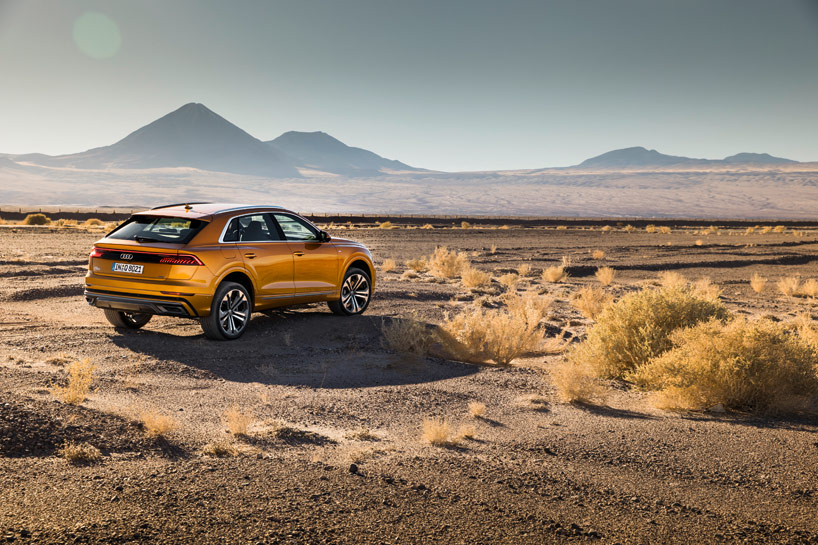 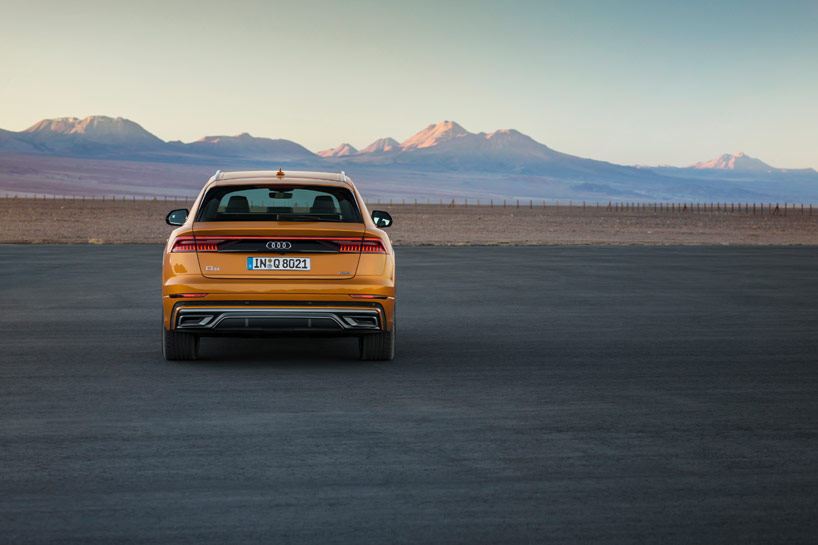 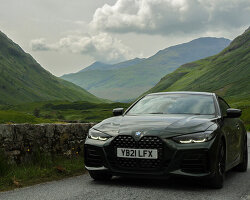